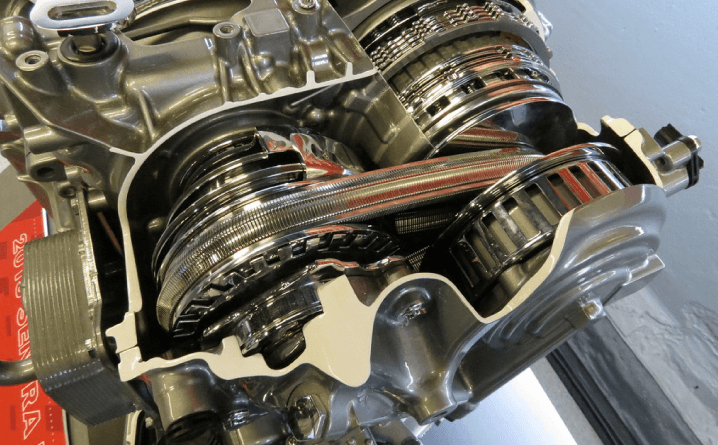 More and more manufacturers are now fitting Continuously Variable Transmissions (CVT) in their ‘Automatic’ Vehicles.
The british motoring public have been somewhat reticent if not reluctent in their embrace what many perceive as a rubber band powering their car. But should they be?

Older drivers may remember the Dutch car manufacturer DAF, that mass-produced the first car with a CVT in the late 50’s. We’re not old enough at Albion Garages to remember this.
But I do remember when the technology was later recycled in the 70’s with the Volvo 340 ‘automatic’ which was an absolutely awful car to drive. It almost felt like a rubber band stretching as you accelerated, and often made drivers think there was something wrong with their car!

So what’s CVT all about?
Believe it or not, it was Leonardo da Vinci who designed the Continuously Variable Transmission (CVT) back in the 15th century.
A Continuously Variable Transmission (CVT) is essentially a single-speed type transmission designed to be able to deliver a smooth driving experience and improve fuel efficiency.
Its design lets the engine run at its most efficient revolutions per minute (RPM) for a range of speeds.

But what about now? Should you buy a car with a CVT? Does your car have a CVT?
When you step hard on the accelerator, the engine races as it would with a slipping clutch or a failing automatic transmission. Fear not, this is normal — the CVT is adjusting the engine speed to provide optimal power for acceleration.

It’s a bit like going out in a boat with a small outboard engine, you rev the outboard and the revs stay the same while the boat gathers speed. You also don’t get that immediacy of throttle control if you increase or decrease the revs, and that can sometimes be unpopular with drivers.

In short, not everybody likes the CVT experience, well initially at least, because it jars horribly with everything they’re used to.

Manufacturers have sidestepped the problem by artificially creating “gears” in their CVTs. Put simply, these are pre-set points where the designers decide that the two pulleys will be of certain relative sizes, just like normal gears.

They then set the CVT to fix those pulley sizes, and when the engine runs out of revs it “changes gear” to the next set of relative pulley sizes. This is the same thing a conventional transmission does, but instead of changing the ratio in stages by shifting gears, the CVT continuously varies the ratio, hence its name.

Another previous downside to the CVT was that there was no towing with one — they weren’t strong enough. This is gradually changing with the tow ratings of some vehicles reaching 2000kg.

Manufacturers are combining CVTs with turbocharged engines, making a perfect combination. It now takes what was a high-revving screamer of an engine and gives it a boost.

Servicing is the key with these transmissions. Not all CVT fluids are compatible with every transmission, in fact traditional automatic transmission fluid (ATF) will likely destroy your CVT.

If you’re buying a new or used car, don’t be afraid of a CVT, as they’re no longer the problem they used to be.

We offer pre-purchase inspections on all makes and models of vehicle you might be considering purchasing. This can sometimes be very cheap insurance against inadvertently purchasing a lemon.
We can of course service and often also calibrate CVT’s in-house to manufacturers specifications using our up to the minute computer diagnostic equipment.